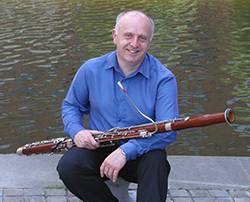 This series of courses established by Laurence Perkins in 2002 has been a great success with wind players who share an enthusiasm for good music-making in beautiful areas. As one of Britainʼs leading solo and orchestral bassoonists, Laurenceʼs work includes 40 years as Principal Bassoonist in Manchester Camerata, with whom he has given concerts as far afield as Japan, Hong Kong and Australia. His work as a soloist is well-known internationally through his CDs for the Hyperion label, including ʻBassoon Concertosʼ (including Mozart and Weber) which was awarded five stars for performance in the BBC Music Magazine, and ʻThe Playful Pachyderm’ – a collection of classic bassoon miniatures with the New London Orchestra conducted by Ronald Corp which received outstanding acclaim in the national press.

One of Laurenceʼs great enthusiasms is working with amateur musicians – alongside his ʻWind Serenadesʼ courses, he is one of the tutors and administrators at the highly popular Malvern Winds chamber music summer course in Worcestershire, as well as the ʻCubertouʼ wind chamber courses in the south of France. He has also tutored on summer schools at Aberystwyth, Kammermusik in Oxford, and at Dartington International Summer School. In the very small amount of spare time available, his other activities include hill-walking and landscape photography.